Join us on Thursday, 18 March 2021 for our second Atlanta International Poetry & Translation Festival.

The event will be live broadcast virtually via BlueJeans. As always, the reading is FREE and open to the public. Click on the "Web Stream Information" tab to the right for information about how to join the event.

As always, A Cappella Books, Atlanta’s oldest independent bookstore will be our official book sales partner for this event. We hope you’ll get a copies of books by our featured poets. See the Book sales tab for more information, or search for the poets on their website. 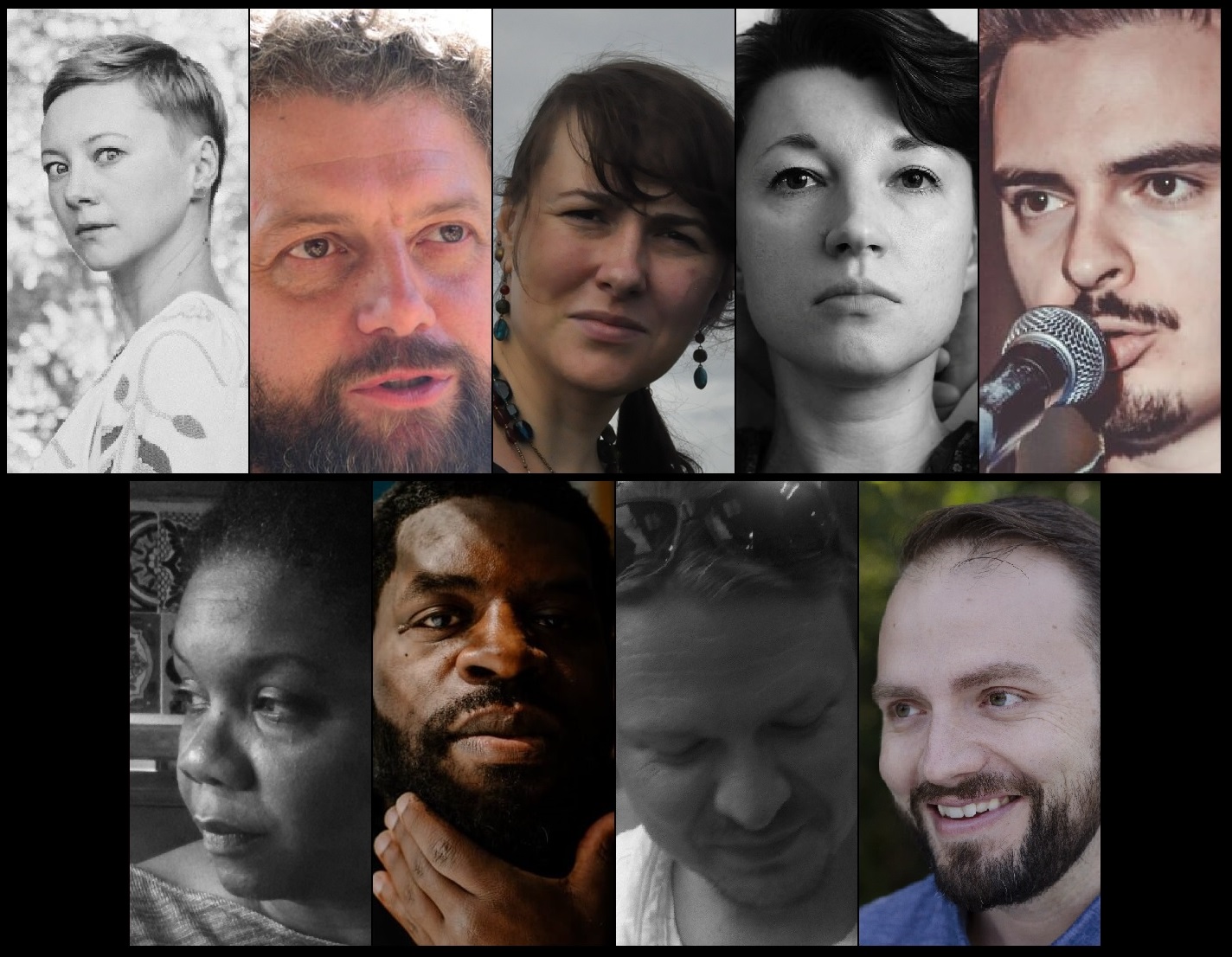 As with our other events for the Poetry@TECH 2020-21 season, this event will be held virtually on BlueJeans. Which means, not only are our readings FREE and open to the public, as always, but you can attend them from anywhere in the world!

To attend the Atlanta International Poetry Festival and Translation Summit on 18 March 2021, follow the instructions below. The reading will begin at 4 pm Eastern Time, but our (virtual) doors open at 3:45 pm ET.

On the occasion of the Atlanta International Poetry and Translation Festival, featuring poets from Belarus, we present a special issue of Terminus, featuring poems and translations by renowned poets from USA and Belarus.

This issue showcases poetry-in-translation at its finest, and showcases the power and urgency of poetry and language as a way to connect peoples from different languages and cultures. In the words of our Guest Editor, Valzhyna Mort:

Intuitively or by solicitation, a translator might come to a poem seeking an aesthetic encounter, but once at work, the choice of words is not only about dictionaries; it’s a moral choice. A choice to hear a voice, to give refuge to a voice, to take care of it, to honor it, to continue the testimony of this voice in another language. Translation is a conversation. And we have a lot to share with each other.

This powerful new issue of Terminus is available for free online viewing at online.fliphtml5.com/gexnc/gqbt/#p=1. Read more about this issue on our Terminus home page.

Valzhyna Mort is a poet and translator born in Minsk. She teaches at Cornell University and writes in English and Belarusian. She translates between English, Belarusian, Russian, Ukrainian, and Polish. Mort 's work has appeared in The New Yorker, The New York Times, Best American Poetry, Poetry Magazine, and Poetry Review among many others. Mort is a recipient of fellowships from the National Endowments for the Arts, the Lannan Foundation, and the Amy Clampitt Foundation, and a recipient of the Burda Prize for Eastern European authors.

Mort is also the author of three collections of poetry in English: Factory of Tears (Copper Canyon Press 2008), Collected Body (Copper Canyon Press 2011), and mostly recently, Music for the Dead and Resurrected (Farrar, Straus and Giroux, 2020), which has been named one of the Best Poetry Books of 2020 by The New York Times and NPR. She also has two full-length poetry collections in Belarusian, 'Я тоненькая як твае вейкі' ('I’m as Thin as Your Eyelashes', Lohvinau, 2005) and 'Эпідэмія Ружаў' ('Epidemic of Roses', Lohvinau, 2017), which have been published in translation in Germany, Sweden, and Ukraine.

Dmitry Strotsev is an award-winning poet and publisher. He is an author of eleven books of poetry and a preserver of the "Minsk school of poetry" which unites non-conformist Russian-language poets in Belarus. An architect by education, Strotsev lives in Minsk. In October 2020 he was kidnapped from the street while walking home and found himself first in the KGB and then in prison.

Maryja Martysevič is a poet, essayist and translator. One of her many literary projects is a book series called Amerykanka which publishes translations of American classics into Belarusian. Maryja is the author of three poetry collections, the latest of which received the Book of the Year Award and the Best Poetry Book of the Year Award in 2018. She lives in Minsk.

Julia Cimafiejeva is an award-winning poet, translator and photographer. She is the author of three poetry collections in Belarusian. Her books have also been released in Germany and Poland. She is one of the founders and editors of a journal of translated literature PrajdziSvet. She translates from English and Norwegian and lives in Minsk. At the end of 2020, Swedish PEN Center published her Protest Diary which details daily life under the Belarusian regime.

Uladzimir Liankievič is a poet, translator and musician. His debut award-winning poetry collection came out in 2014. He has been a part of several successful musical projects. In the fall of 2020, Uladzimir was detained twice by the authoritarian regime in Belarus and served two sentences. He lives in Minsk.

Vievee Francis is the author of three books of poetry: Blue-Tail Fly (Wayne State University Press, 2006), Horse in the Dark (winner of the Cave Canem Northwestern University Poetry Prize for a second collection, Northwestern University Press, 2011) and Forest Primeval (winner of the Hurston Wright Legacy Award and the 2017 Kingsley-Tufts Poetry Award, Northwestern University Press, 2016). Her work has appeared in numerous print and online journals, textbooks, and anthologies, including POETRY, Best American Poetry 2010, 2014, 2017, 2019, and Angles of Ascent: A Norton Anthology of Contemporary African American Poetry. She has been a participant in the Cave Canem Workshops, a Poet-in-Residence for the Alice Lloyd Scholars Program at the University of Michigan, and teaches poetry writing in the Callaloo Creative Writing Workshop (USA, UK, and Barbados). In 2009 she received a Rona Jaffe Writer’s Award, and in 2010, a Kresge Fellowship. She serves as an associate editor of Callaloo and an associate professor of English and Creative Writing at Dartmouth College in Hanover, NH.

Hanif Abdurraqib is a poet and critic from the east side of Columbus, Ohio. His latest book, A Little Devil In America, is forthcoming in March 2021. His work has been published in various journals, from PEN American to New York Times. His third book, Go Ahead in the Rain: Notes to a Tribe Called Quest (University of Texas Press, 2019) became a New York Times best seller, was a finalist for the Kirkus Prize, and was long-listed for the National Book Award. His second collection of poems, A Fortune for Your Disaster, was released in 2019 by Tin House and won the 2020 Lenore Marshall Poetry Prize.

Travis Wayne Denton lives in Atlanta where he is the Associate Director of Poetry @ TECH as well as McEver Chair in Poetry at Georgia Tech. He is also founding editor of the literary arts publication, Terminus Magazine. His poems have appeared in numerous journals, magazines and anthologies, such as Five Points, Ghost Town, MEAD: a magazine of literature and libations, The Atlanta Review, The Greensboro Review, Washington Square, Forklift, Rattle, Birmingham Poetry Review, and the Cortland Review. His second collection of poems, When Pianos Fall from the Sky, was published by Marick Press.

Mario Chard is the author of Land of Fire (Tupelo Press, 2018), winner of the Dorset Prize and the Georgia Author of the Year Award in Poetry. Recent poems have appeared in The New Yorker, Poetry, Boston Review, and elsewhere. Winner of the “Discovery” Poetry Prize and a former Wallace Stegner Fellow at Stanford University, he lives in Atlanta, Georgia.

As always, A Cappella Books, Atlanta’s oldest independent bookstore will be our official book sales partner for th is event. We hope you’ll get a copy or two (or six) of books by our wonderful featured poets. You can order at the following links: