Although we can't all come together in person as we have for so many years of Poetry@Tech, we welcome you to our 2020-21 Virtual Season. All of our events will be streaming online this season. We'll be posting the links to the events soon, as well as our Spring 2021 events. So please check back.

As always, the reading is FREE and open to the public.

We have a great line-up for the reading, featuring poets Danez Smith and Ross Gay. See more about our featured poets by clicking on the tabs to the right, or click on the poets' photographs below.

The web link for the event and information for how to join is below, and on the tab to the right. Keep an eye on this page for any updates.

To join via your computer’s web browser: just click on: https://primetime.bluejeans.com/a2m/live-event/hxhjpkxu.

To join on your mobile device:

To join by phone: Dial one of the following numbers, enter the participant PIN followed by # to confirm:

As always, A Cappella Books, Atlanta’s oldest independent bookstore will be our official book sales partner for this event. We hope you’ll get a copy (or two) of Ross’s and Danez’s books. See the Book sales tab on the right for more information, or search for the poets on their website by clicking the button below. 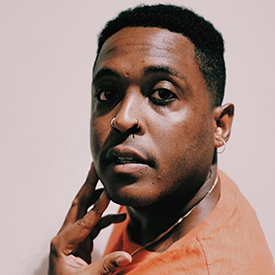 Danez Smith is a Black, Queer, Poz writer & performer from St. Paul, MN. Danez is the author of Don’t Call Us Dead (Graywolf Press, 2017), winner of the Forward Prize for Best Collection, the Midwest Booksellers Choice Award, and a finalist for the National Book Award. They also wrote [insert] boy (YesYes Books, 2014), winner of the Kate Tufts Discovery Award and the Lambda Literary Award for Gay Poetry. They are the recipient of fellowships from the Poetry Foundation, the McKnight Foundation, the Montalvo Arts Center, Cave Canem, and the National Endowment for the Arts. Danez's work has been featured widely, appearing on platforms such as BuzzFeed, The New York Times, PBS NewsHour, Best American Poetry, Poetry Magazine, and on the Late Show with Stephen Colbert. Danez is a member of the Dark Noise Collective and is the co-host of VS with Franny Choi, a podcast sponsored by the Poetry Foundation and Postloudness. Danez’s third collection, Homie, was published by Graywolf in January 2020. 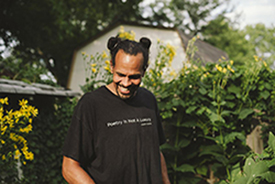 Ross Gay is the author of four books of poetry: Against Which; Bringing the Shovel Down; Be Holding; and Catalog of Unabashed Gratitude, winner of the 2015 National Book Critics Circle Award and the 2016 Kingsley Tufts Poetry Award. His new poem, Be Holding, will be released from the University of Pittsburgh Press in September of 2020. His collection of essays, The Book of Delights, was released by Algonquin Books in 2019.

Ross is also the co-author, with Aimee Nezhukumatathil, of the chapbook "Lace and Pyrite: Letters from Two Gardens," in addition to being co-author, with Rosechard Wehrenberg, of the chapbook, "River." He is a founding editor, with Karissa Chen and Patrick Rosal, of the online sports magazine Some Call it Ballin', in addition to being an editor with the chapbook presses Q Avenue and Ledge Mule Press. Ross is a founding board member of the Bloomington Community Orchard, a non-profit, free-fruit-for-all food justice and joy project. He also works on The Tenderness Project with Shayla Lawson and Essence London. He has received fellowships from Cave Canem, the Bread Loaf Writer's Conference, and the Guggenheim Foundation. Ross teaches at Indiana University.

Due to the COVID-19 pandemic, the Poetry@Tech 2020-21 season is going virtual. Which means, not only are our readings FREE and open to the public, as always, but you can attend them from anywhere in the world!

To attend the 19th Annual Bourne Poetry Reading with Danez Smith and Ross Gay on 1 October 2020, follow the instructions below. The reading will begin at 7 pm Eastern Time, but our (virtual) doors open at 6:45 pm ET.

To join via your computer’s web browser: just click on: https://primetime.bluejeans.com/a2m/live-event/hxhjpkxu.

To join on your mobile device:

To join by phone: Dial one of the following numbers, enter the participant PIN followed by # to confirm:

As always, A Cappella Books, Atlanta’s oldest independent bookstore will be our official book sales partner for this event. We hope you’ll get a copy (or two) of Ross’s and Danez’s books. You can order at the following links:

& a group of distinguished special guest poets from Germany

This event is made possible in co-operation with Poetry@Tech, Terminus Magazine, Emory University, Westminster School, Berry College, and the Haus für Poesie Berlin.

The event will be broadcast virtually over BlueJeans. As always, the reading is FREE and open to the public.

Watch this space for more details and updates. 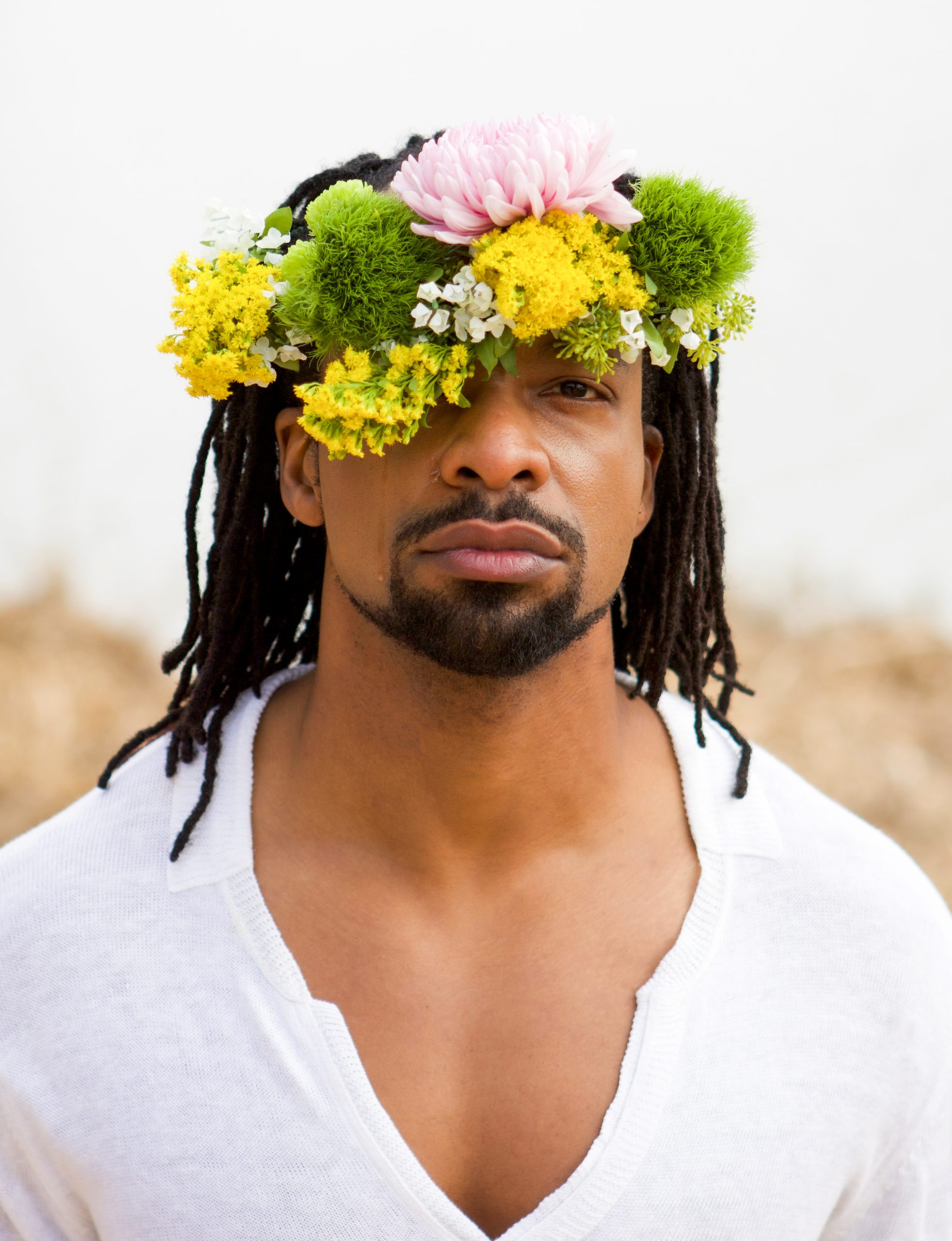 Jericho Brown is author of the The Tradition (Copper Canyon 2019), for which he won the Pulitzer Prize. He is the recipient of fellowships from the Guggenheim Foundation, the Radcliffe Institute for Advanced Study at Harvard, and the National Endowment for the Arts, and he is the winner of the Whiting Award. Brown’s first book, Please (New Issues 2008), won the American Book Award. His second book, The New Testament (Copper Canyon 2014), won the Anisfield-Wolf Book Award. His third collection, The Tradition won the Paterson Poetry Prize and was a finalist for the National Book Award and the National Book Critics Circle Award. His poems have appeared in The Bennington Review, Buzzfeed, Fence, jubilat, The New Republic, The New York Times, The New Yorker, The Paris Review, TIME magazine, and several volumes of The Best American Poetry. He is the director of the Creative Writing Program and a professor at Emory University. 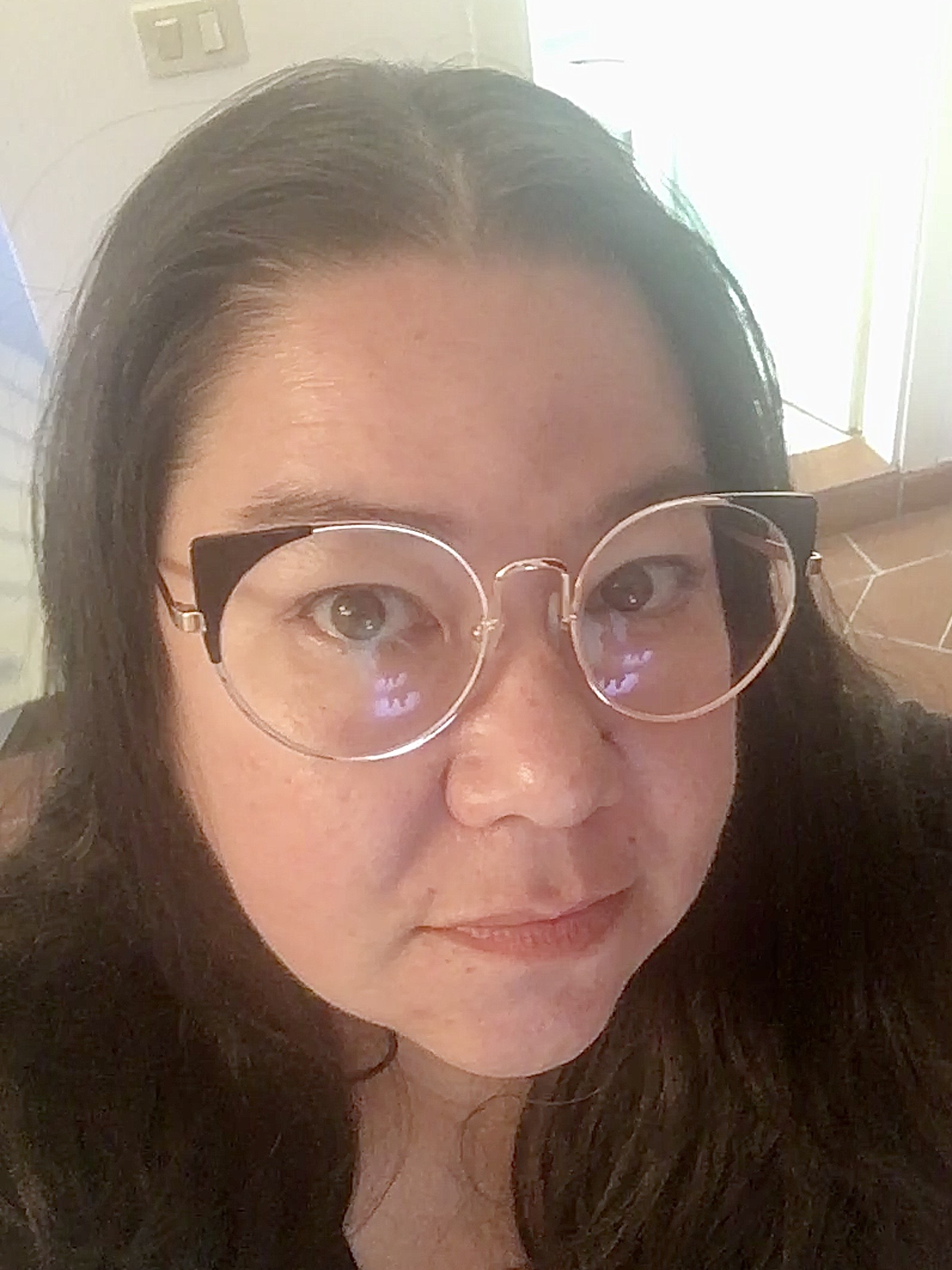 Brenda Shaughnessy is the author of five poetry books, including The Octopus Museum (Knopf 2019), a New York Times Notable Book. Recipient of a 2018 Literature Award from the American Academy of Arts and Letters and a 2013 Guggenheim Foundation Fellowship, she is Professor of English at Rutgers University-Newark.

Sandra Meek is the author of six books of poems: Still, forthcoming from Persea Books January 14, 2020; An Ecology of Elsewhere (Persea Books, May 2016); Road Scatter (Persea Books, 2012); Biogeography, winner of the Dorset Prize (Tupelo 2008); Burn (2005), and Nomadic Foundations (2002), as well as a chapbook, The Circumference of Arrival (2001). She is also the editor of an anthology, Deep Travel: Contemporary American Poets Abroad (Ninebark 2007), which was awarded a 2008 Independent Publisher Book Award Gold Medal.

Her poems have appeared in The American Poetry Review, Agni, Terrain.org, Ecotone, The Kenyon Review, Prairie Schooner, Poetry, Conjunctions, and The Iowa Review, among others. A recipient of a 2011 National Endowment for the Arts Fellowship in Poetry and the 2015 Lucille Medwick Memorial Award from the Poetry Society of America, she has three times been awarded Georgia Author of the Year in Poetry, in 2017 for An Ecology of Elsewhere, in 2006 for Burn, and in 2003 for Nomadic Foundations. She has also twice been awarded the Peace Corps Writers Award in Poetry, for An Ecology of Elsewhere and for Nomadic Foundations.

Meek served as a Peace Corps volunteer in Manyana, Botswana, 1989-1991, where she taught English at Boswelakgosi Junior Secondary School. She is Co-founding Editor of Ninebark Press, Director of the Georgia Poetry Circuit, Poetry Editor of the Phi Kappa Phi Forum, and Dana Professor of English, Rhetoric, and Writing at Berry College. Born in El Paso, Texas, she grew up in Fort Collins, Colorado. She received her BA in English and MFA in Creative Writing from Colorado State University, and a PhD in English, Creative Writing, from the University of Denver. Since 1996, she has lived in Rome, Georgia. 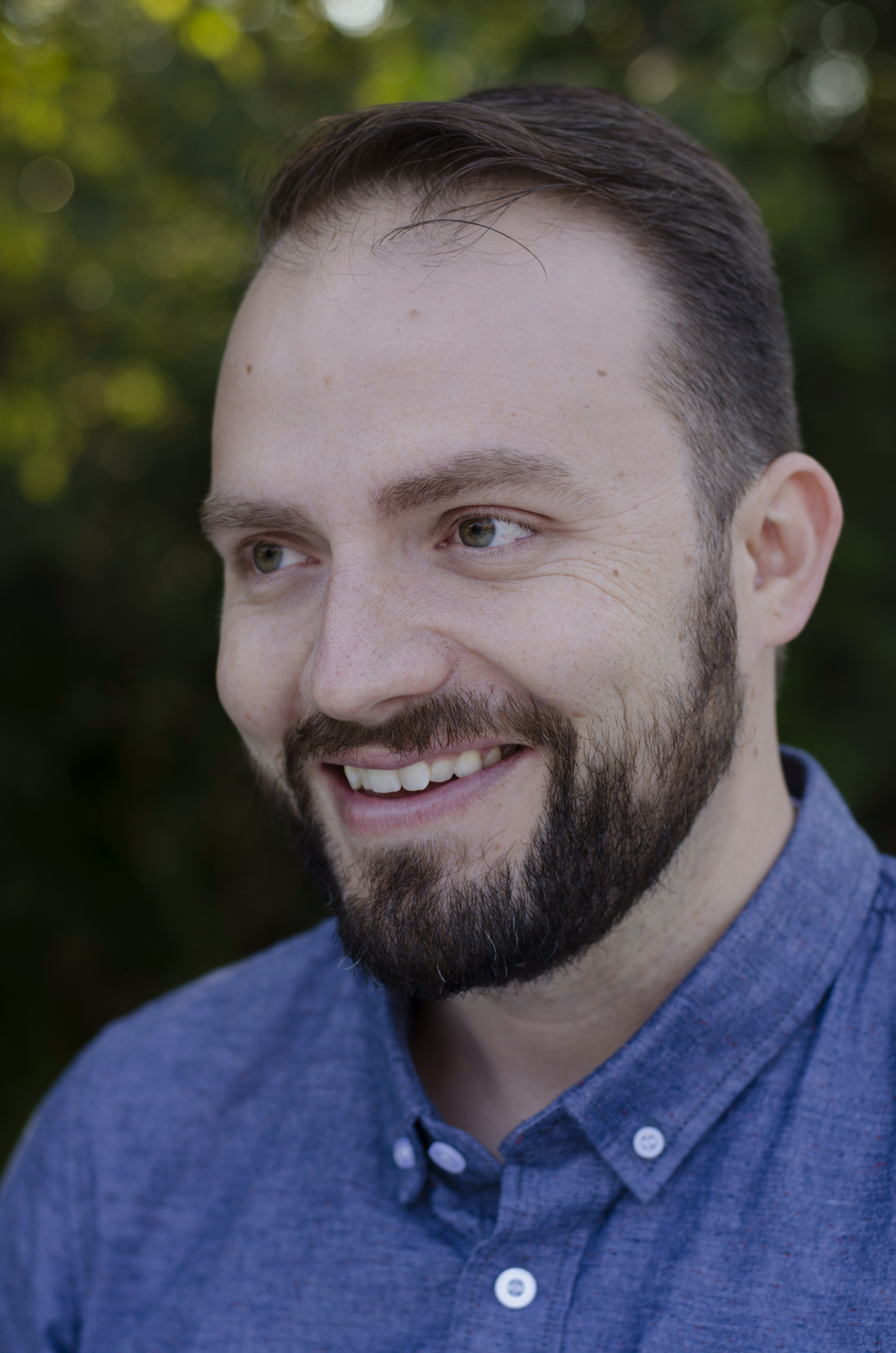 Mario Chard is the author of Land of Fire (Tupelo Press, 2018), winner of the Dorset Prize and the Georgia Author of the Year Award in Poetry.

Recent poems have appeared in The New Yorker, Poetry, Boston Review, and elsewhere. Winner of the “Discovery” Poetry Prize and a former Wallace Stegner Fellow at Stanford University, he lives in Atlanta, Georgia.

As always, A Cappella Books, Atlanta’s oldest independent bookstore will be our official book sales partner for this event. We hope you’ll get a copy or two (or six) of books by our wonderful featured poets. You can order at the following links: 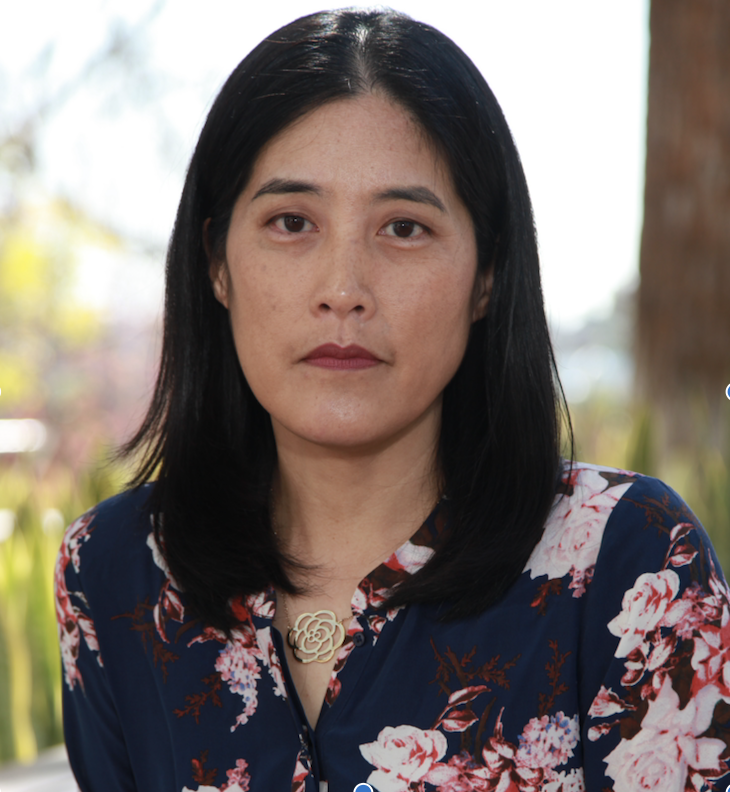 Victoria Chang's fourth book of poems, Barbie Chang, is forthcoming from Copper Canyon Press. The Boss (McSweeney's) won the PEN Center USA Literary Award and a California Book Award. Other books are Salvinia Molesta and Circle. She was awarded a 2017 Guggenheim Fellowship. She lives in Southern California and teaches at Chapman University and the Orange County School of the Arts. 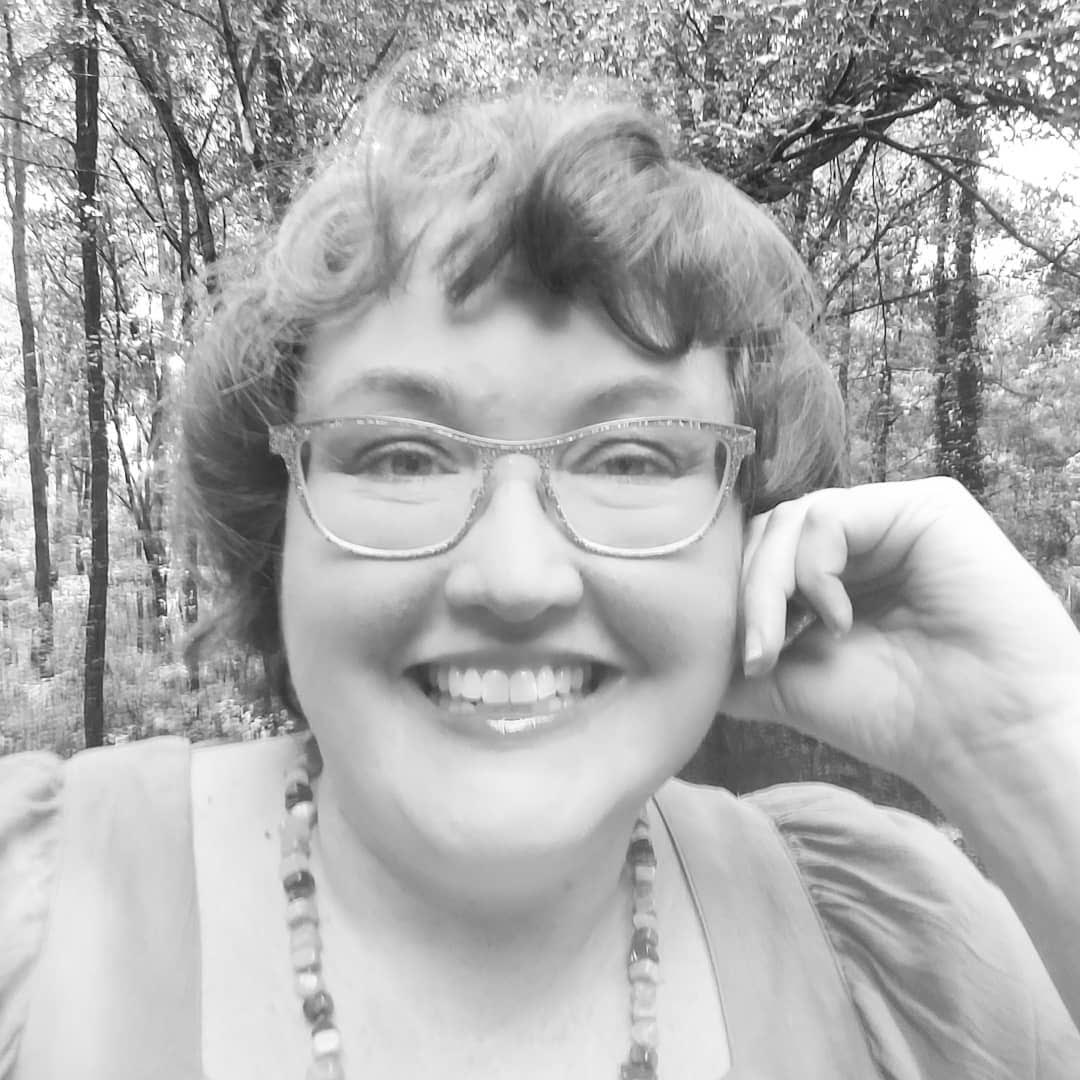 JC Reilly writes across genres to keep things interesting, and has never met a hybrid piece she didn't love.  What Magick May Not Alter, her Southern Gothic novel-in-verse,  was published by Madville Publishing in 2020. She is also the author of the chapbook La Petite Mort, and a contributing author in a book of occasional verse, On Occasion:  Four Poets, One Year.  She serves as the Managing Editor of Atlanta Review and teaches creative writing at Georgia Tech.  When she's not writing, she crochets, plays tennis, or practices Italian.  Follow her on Twitter @Aishatonu, or follow her cats on Instagram @jc.reilly.