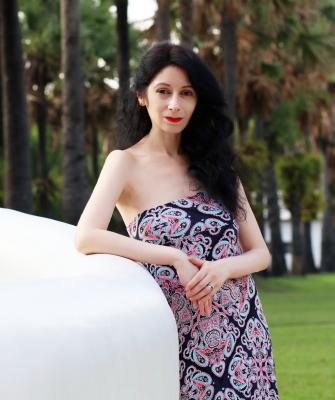 Born to a Mexican mother and Jewish father, Rosebud Ben-Oni is the winner of 2019 Alice James Award for If This Is the Age We End Discovery, which received a Starred Review in Booklist and was a Finalist for the 2021 National Jewish Book Award in Poetry. She is also the author of turn around, BRXGHT XYXS (Get Fresh Books, 2019) and her chapbook 20 Atomic Sonnets, which appears online in Black Warrior Review (2020) as part of a larger future project called The Atomic Sonnets started in honor of the Periodic Table’s 150th Birthday.

She is a recipient of a 2021 City Arts Corps grant, a 2021 Queens Arts Fund grant from the Queens Council for the Arts, a 2014 NYFA Fellowship in Poetry and a 2013 CantoMundo Fellow. Her poem 'Dancing with Kiko on the Moon' was recently featured in Tracy K. Smith’s The Slowdown. In 2017, her poem 'Poet Wrestling with Angels in the Dark' was commissioned by the National September 11 Memorial & Museum in NYC, and published by The Kenyon Review Online. She lives in New York City where she teaches poetry workshops at Catapult, The Speakeasy Project and UCLA Writers’ Program online. She writes weekly for The Kenyon Review blog.

In May 2022, Paramount commissioned her video essay 'My Judaism is a Wild Unplace' for a campaign for Jewish Heritage Month, which appears on Paramount Network, MTV Networks, The Smithsonian Channel, VH1 and many others.

Poet Wrestling with Angels in the Dark

the whole of the city

but never finished, the whole of this city

don’t always open
without the whole of the city
filling us all to the brim.

& i have ridden my beloved 7 carrying post-heartbreak
jerusalem, when more than once i was broken glass
shattering in the midharov
empty on sabbath morning.

& in these shards are the stained-glass angels
i have wrestled in the dark,
wrapped around their soda-lime
limbs like potter’s wheel.