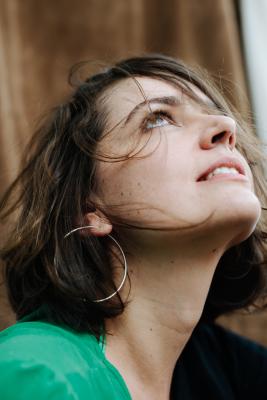 Lyuba Yakimchuk is a poet, screenwriter, playwright, born 1985 in Pervomaisk Luhanska oblast, and currently living in Kyiv, Ukraine. She is the author of several full-length poetry collections, including Like FASHION and Apricots of Donbas, a collection of poems about people surviving a war, which received the International Poetic Award of the Kovalev Foundation (NYC, USA). Apricots of Donbas was listed in the Top 10 books about the war by Forbes magazine in Ukraine.

Kyiv’s New Time magazine (Novoye Vremia) listed Yakimchuk among the one hundred most influential people in the arts in Ukraine. She has also received a number of awards, including the International Slavic Poetic Award, the Bohdan-Ihor Antonych Prize and Smoloskyp Prize, three of Ukraine’s most prestigious awards for young poets.

Lyuba performed in a musical and poetic duet with a double-bass player Mark Tokar (Lviv, Ukraine) and a vocalist Olesya Zdorovetska (Dublin, UK). As a vocalist, she performed in Fokstroty project by Serhiy Zhadan and Yuri Gurzhy. Her poetry has also been performed by singer Mariana Sadovska (Germany) as part of the project «2014».