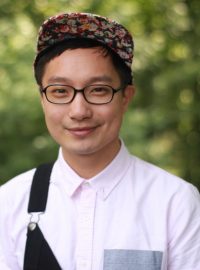 Chen Chen is the author of When I Grow Up I Want to Be a List of Further Possibilities (BOA Editions, 2017), which won the A. Poulin Jr. Poetry Prize, the Thom Gunn Award for Gay Poetry, and the GLCA New Writers Award. His most recent collection Your Emergency Contact Has Experienced an Emergency is forthcoming from BOA Editions in 2022.

Longlisted for the National Book Award, When I Grow Up I Want to Be a List of Further Possibilities was also a finalist for the Lambda Literary Award for Gay Poetry, and was named one of the best of 2017 by The Brooklyn Rail, Entropy, Library Journal, and others. About the collection, Stephanie Burt says,

As Chen’s younger self had to escape from constricting familial expectations (become a lawyer, marry a woman, buy a house), the adult writer has to escape from the constrictions of autobiography, into hyperbole, stand-up comedy, fairy tale, twisted pastoral. It’s easy to imagine a young reader seeing himself here as he had not seen himself in poems before.

He is also the author of two chapbooks, Set the Garden on Fire (Porkbelly Press, 2015) and Kissing the Sphinx (Two of Cups Press, 2016).

In an interview with NPR, Chen explained,

"I felt like I couldn’t be Chinese and American and gay all at the same time. I felt like the world I was in was telling me that these had to be very separate things." As someone who was struggling with his sexuality and thinking about identity— with immigrant parents and wondering how to come out, “Poems were a way for those different experiences to come together, for them to be in the same room.”

His work has appeared in many publications, including Poetry, Tin House, Poem-a-Day, The Best American Poetry, Bettering American Poetry, and The Best American Non-required Reading. Recently, his work has been translated into French, Greek, Spanish, and Russian. Poets & Writers Magazine featured him in their Inspiration Issue as one of “Ten Poets Who Will Change the World.” He has received fellowships from Kundiman, Lambda Literary, and the Saltonstall Foundation.

Chen earned his MFA from Syracuse University and is pursuing a PhD in English and Creative Writing as an off-site Texas Tech University student. He lives in frequently snowy Rochester, NY with his partner, Jeff Gilbert and their pug dog, Mr. Rupert Giles.