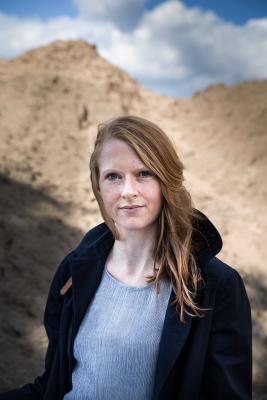 Anja Kampmann studied at the University of Hamburg and at the Deutsches Literaturinstitut (German Literature Institute) in Leipzig. In 2010, she received a scholarship to the International Writing Program at the University of Iowa. She then worked for the radio, and on a dissertation on silence and musicality in Samuel Beckett's late work. Her poems have been published in magazines such as Akzente, Neue Rundschau, Wespennest and in the anthology Jahrbuch der Lyrik. She received the 2013 MDR literature award and the 2015 Wolfgang Weyrauch sponsorship award at the Leonce and Lena competition in Darmstadt. Her poetry debut 'Proben von Stein und Licht' ('Samples from Stone and Light') was published by Carl Hanser Verlag in 2016. Her first novel 'Wie hoch die Wasserstieg' ('How high the water rises', translated by Anne Posten) was a 2020 finalist for the National Book Award for Translated Literature, won the Mara Cassens Prize for the best German-language debut novel and the Lessing Promotion Prize, and was nominated for the Leipzig Book Fair Prize and the German Book Prize in 2018. Anja was born in Hamburg in 1983, and lives in Leipzig.